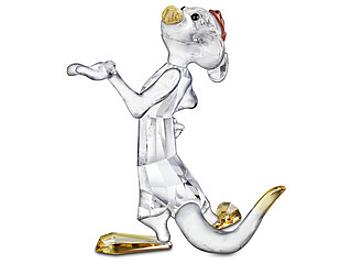 Image gallery (2)
Timon the meerkat has a good heart but is not as clever as he'd like to think, often claiming Pumbaa's good ideas as his own. Together with Pumbaa, Timon raised young Simba after finding him lost and alone. The body and tail of this popular Disney character sparkle in clear crystal, while his hair gleams in Light Smoked Topaz crystal with Red Magma effect. His nose, tip of his tail and paws are created in Crystal Golden Shadow and his eyes gleam cheerfully in Jet crystal.
Size: 5.3 x 5.8 cm