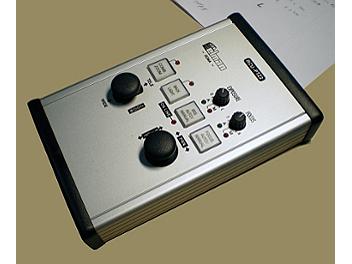 Image gallery (4)
Conceived for being used for the video surveillance, the television cameras PTZ (Pan, Tilt, Zoom) are also affirmed in the field of the television shots
thanks to a quality that is now equal the classical videocameras (they exist in version with 3 ccds and also for high definition), but above all for the
fact that being controllable by remote, they don't have need of a cameraman that manages it, they are very small and little invasive especially when
the shots are executed in particular environments: churches, places of cult, surgery rooms, etc...
The Elman has realized to the purpose: RCU-PTZ2, a very simple remote control that allows to drive from distance, television cameras type PTZ, with VISCA protocol interface.
RCU-PTZ2 is very intuitive in his operation and it is realized in an elegant aluminum box.
The characteristics are identical to the precedent model RCU-PTZ but in this version has been included an interface that allows the control of all
the functions of the videocamera (except the focus, that can be planned in automatic) through a remote telephone by numerical keyboard.

The remote control RCU-PTZ2 also has an led for signaling "On Line" when is active the telephone command.
The cable coming from the television camera PTZ is connected to a connector D female with 9 pins (protocol VISCA - RS422).
Particularly the RCU-PTZ2 has been tested with success with Sony television cameras model: EVI-D70, EVI-D100 and EVI-D30 but the range of
models with which it can be interfaced is very wide.
The remote control is powered with a 8-12 V voltage (150 mA) supplied by a external power supply (given with RCU-PTZ2)