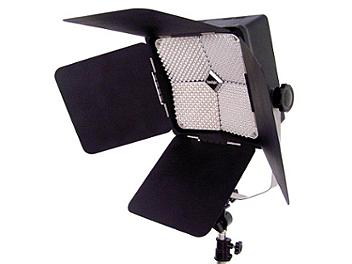 Write a review
to noisy

By nico from netherlands on 2011-03-04
I agree, the fan makes to much noise and sometimes there is some dimmer-noise. Nice light for shooting without sound...?
good light however serious design faults encountered

By truestory from Perth, Australia on 2010-08-26
I purchased one of these to try out as a main interview light for location work. Previous I have been lugging around a fluro bank, which always needs power..This light is fabulous in many respects as it has a very small footprint, is very bright with V mount battery, however it is quite noisy when turned on which is quite strange for LED technology, it sounds like the dimmer assy is buzzing... The dimmer is not variable it drops off quite noticeably , you do not have variable brightness, just a few steps..
The barn doors are a great idea, having a diffuser plus a correction filter as barn door, however the design is flawed as the correction door broke off 2 days into use..
This is a design fault as the plastic mould that holds the doors is not strong enough so this will be an issue for anyone who purchases...
Overall I would give this product 6/10