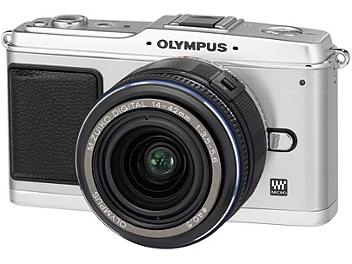 Live View Autofocus
With the seamless precision and simplicity of a point-and-shoot, the E-P1's Live View Autofocus system displays the images to be shot in complete focus on the camera's bright LCD the moment the shutter button is pressed half way down.

12.3 megapixel
The E-P1's powerful 12.3 megapixel Live-MOS sensor packs a powerful high-quality imaging punch for such a compact camera, allowing you to capture more detail than ever before.

MF Assist
For accurate manual focusing, MF Assist can be enabled during S-AF + MF operation. With it you can zoom in on the central part of the image by up to five times by turning the focus ring.

Digital Leveler
The camera's Digital Leveler function is a highly functional and practical feature for such specialized requirements as architectural photography and other similar needs.

Dust Reduction System
A Dust Reduction System assures spot-free images. Every time you turn on the camera, the patented Supersonic Wave Filter silently vibrates, flinging and collecting dust so that it cannot interfere with the picture imaging at any time.

ePortrait
The ePortrait mode is also useful for smoothing out the facial features of your subjects, which is a tremendous plus for High Definition playback.

Face Detection
A Face Detection function reduces the chance of blurry faces when shooting groups of people-up to eight subjects at once-even if they're moving while you're pressing the shutter button.

Aspect Ratios
The E-P1 lets you select one of four Aspect Ratios (4:3, 3.2, 16.9 and 6.6) that help frame your images to whatever proportions you'd like, for everything from conventional enlargements to viewing on widescreen monitors.

iAuto
iAuto identifies your shooting intent (such as macro or action photography) and instantly adjusts the camera settings to achieve the best results.

Slideshows
Slideshows have never been easier or more fun to create. The E-P1's enhanced playback functions allow you to employ effective fade-in/fade-out techniques, add captivating musical soundtracks, and much more.

Ultra-compact body
The E-P1 is the definition of state-of-the-art optical engineering in an ultra-compact body. It weighs just 11.8 ounces and measures just 4.75" (W) x 2.75" (H) x 1.43 (D), giving it the facility to slip into pockets or purses and to take with you anywhere.

Sound recording
The sound recording function of the E-P1 helps you capture all the nuances of any sounds being recorded. The system is capable of recording and playing back WAV files, and of adding the most professional-sounding narration to digital slide shows.

Background music
There are also five separate background music files to choose from that you can add to your still images or video productions.

SDHC media cards
The E-P1 is capable of recording video to SDHC media cards to accommodate large files. (SDHC Class 6 cards are recommended.) Videos, stills and high-fidelity audio can also be output via HDMI cable-direct to any HD television.

Full manual control
Full manual control for all programs and functions, including Aperture and Shutter Speed Priority, is at your fingertips whenever it is needed or preferred. Full automatic control is also a button-press away.

Live Control
Live Control, an advanced camera management system, allows you to see the image being shot and the camera's controls all at once, on the bright, colorful, high definition 3-inch HyperCrystal LCD. HyperCrystal LCDs offer many times the contrast of conventional LCD monitors, and also provide a wide viewing angle of 176o.