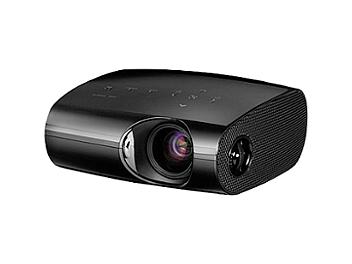 170 ANSI Lumens and a 1000:1 Contrast Ratio
OK, so the brightness of this mighty mite isn't measured in the thousands of lumens. But 170 lumens isn't as low as you might assume. Brightness perception is logarithmic. To keep you from scurrying to find a high school math book we'll explain that it means this projector would seem to be about half as bright as one that put out a very respectable 1700 lumens.
A Palm-Sized Projector With Big Projector Features
For such a tiny projector Samsung has engineered in a lot of features you'd expect to find only in a full sized projector and a few that many full sized projectors don't have. One of them is 3:2 pulldown. Because motion pictures are filmed at 24 frames per second (fps) and video is recorded at 30 fps translating film to video has always been problematic. The solution better projectors use is 3:2 pulldown. Without boring you with technobabble let's just say it's one of the more elegant solutions developed. Another one of the P410M's advanced features is progressive scan, which makes DVDs look more like Blu-ray discs. The P410M's digital noise reduction improves the look of all of your programming
LED Light Source Lasts a Lifetime
That's the projector's estimated lifetime, not your lifetime. Or to put it into numbers, about 30,000 hours. If you use the projector every hour of every business day of the year it should last about 15 years (but we don't recommend that duty cycle for the projector or you for that matter).
Use the USB Port for No-Computer Multimedia Presentations
The P410M delivers instant access to entertainment through its innovative USB interface. With its built-in multimedia player, you can enjoy a wide variety of video, music, and picture files with no need to lug your laptop along. Simply plug in, play, and bathe in the beauty of a truly cinematic experience right down to the stereo soundtrack, courtesy of the built-in one-watt stereo speakers. Sure, two one-watt speakers aren't going to fill a concert hall but you're not going to be using the P410M in one anyway. And besides, the projector itself is literally whisper quiet at 28dB.
Handles a Wide Variety of Source Material
The P410M can project NTSC, PAL and SECAM video signals. While we wouldn't want to watch say, The Ten Commandments on it, it can play DVD discs. What it's ideal for is displaying data from a PC or a USB thumb drive. This data can include JPEG, BMP and GIF pictures and MPEG1, MPEG2, MP3, MPEG4, AVI and MOV files among others. Road warriors will really appreciate how you can leave your laptop back at the hotel and still tell your whole story to your audience.
A Lean and Green Machine
LED projectors use 90% less energy than conventional ones. The P410M, for example, sips less than 54 watts of power when it's in use and less than two watts in standby mode. So it's less harmful to the environment compared to conventional projectors. The light source is 100% halogen-free so it can run at a much lower temperature and produce less heat radiation. The LEDs are also more resilient and last much longer than HID or incandescent bulbs and are also mercury-free so they are less harmful to the environment. In addition, the lens is lead-free as is the solder on the circuit boards. As a consequence the P410M is RoHS-compliant. (RoHS is the European Union directive on the use of hazardous substances in electronic equipment.)