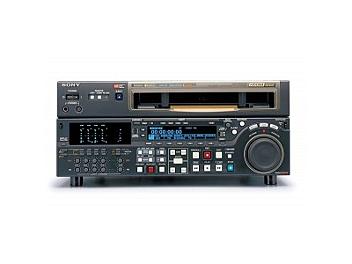 Sony recognises that your needs as a programme maker will vary depending upon the type of programme being made. This has driven the development of a multi-format high definition product offering, including HDV for entry-level HD operation, HDCAM for mainstream and prestige productions, CineAlta for 24P applications, and HDCAM SR for productions where only the ultimate quality will suffice.

HDCAM has long been associated with the production of the most prestigious movies, commercials and television programmes. The recent expansion of the HDCAM product line up has transformed the economics of HD for mainstream television production, with new models such as the HDW-730S camcorder making HD acquistion accessible to those working on standard definition budgets.

It is ideal as part of an end-to-end HDCAM production chain, and makes business sense even when post production and programme distribution remains at 625/50 standard definition. An inbuilt HD to SD downconverter provides a standard definition output from your high quality HDCAM original recordings. Compatible replay of Betacam, Betacam SP, Betacam SX, MPEG IMX and Digital Betacam tapes also helps smooth your transition to the world of high definition.

This product comes with PrimeSupport - fast, hassle-free repairs and a helpline offering expert technical advice. Which gives you the peace of mind that Sony is looking after your equipment, and your business.

The HDW-M2100P/20 has a built in HD to SD downconverter and a built-in SD to HD upconverter. Downconversion allows tapes shot in HDCAM to be output in standard definition for subsequent post production or distribution. The downconverted image can be squeezed or cropped within the VTR for display on a 4:3 monitor.
No compromise in editing performance

The HDW-M2100P/20 can be combined with an HDCAM recorder for assemble, insert and pre-read editing.
Broadcast quality slow motion

The HDW-M2100P/20 has DT (Dynamic Tracking) heads as standard. Broadcast quality pictures can be replayed in the range -1 to x2 speed from HDCAM tapes, and from -1 to x3 speed when replaying Betacam, Betacam SP, Betacam SX, MPEG IMX and Digital Betacam cassettes.
High quality picture search and jog

Selecting edit points is easy with the HDW-M2100P/20. Pictures and sound can be searched at up to x50 normal speed.
Compact chassis

The HDW-M2100P/20 uses a 4U chassis design, in common with MPEG IMX VTRs and the new DVW-M2000P series Digital Betacam VTRs.
Surround sound

Both Dolby-E and AC-3 are handled as standard