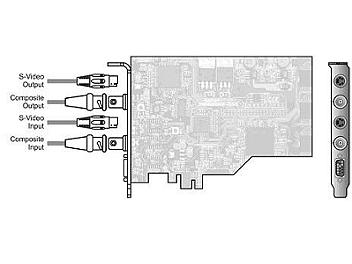 Image gallery (1)
Stream ALPHA Plus PCI-E is designed to work with Composite or S-Video by-pass signal whether using PAL, SECAM or NTSC. Stream ALPHA Plus has all-digital image formation chain which guarantees perfect quality of generated signal and its better binding to the input signal.

The board overlays graphics over live video signal using alpha-channel that allows setting the transparency level of each pixel of the image and changing it while playing.

Stream ALPHA Plus PCI-E is equipped with internal synch generator that switches on automatically if the input signal is missing. If computer power supply is switched off or BYPASS mode is activated, the output is directly connected to the input through relay contacts, and 75 Ohm load on the board is disconnected. The board can overlay computer graphics over video signal whether inside itself or on the external mixer. To work with external mixer the board has a special KEY output. It is possible to switch on/off multiplication of generated image by alpha-channel.

In addition to the common for Stream ALPHA boards analog mixing performed without any delay, the board has digital mode that enables decoding of the input video signal. The decoding and subsequent coding delays the video signal (about 10 mks). Digital mixing makes it possible to change standards of output signal relative to input signal (PAL<->SECAM, CVBS<->S-Video). Besides, it allows decreasing requirements to the quality of input signal, keeping the high quality of output signal. Composite signal is decoded using color combine filter to divide brightness and chrominance.

The possibility of grabbing and hardware scaling of video signal from the board's inputs allows changing the size of incoming video and overlay titles in BY-PASS mode using minimal resources of central processor.

Due to the usage of PCI-Express bus on Stream ALPHA Plus Express, interface and board bandwidth enables overlaying full screen titles through alpha channel and grabbing input video signal at the same time.

All the graphics generated by the card passes through the active digital filter. It is possible to enable/disable the insertion of the sync into the "Green" signal of the component output and alpha-channel. Component YUV output and alpha-channel (Key) output allows working with the mixer, that has appropriate input and DSK input.

Stream TELE-INFO 2.2 system consolidates playback of animated backgrounds, sports and entertainment graphics, video clips and branding elements.
Easy-to-use wizards and pre-created templates designed for broadcasters to get on the air with a high-end look in no time.
A single affordable PC can be used for TV titles mapping over output and broadcasting.

Stream TELE-INFO is capable to control external DV or other player over the FireWire interface. Played video signal can be mixed with your data according to the play list. It is possible to use video stream as a clip in the schedule.
There are some devices acting as a digital data stream source, such as controller with IEEE-1394 DV capture interface, universal TV tuner or web-camera. Any kind of digital data stream can be displayed neither on the whole screen, nor in the picture-in-picture mode.

Creation of "Crawl" or "Roll" type objects above live video signal and a clip or a stream, which is used in schedule.

It is also possible to overlay animated logotypes inside moving text and to specify pause or speed changing markers inside the crawl.

Program allows creating graphic design of music channels exactly the look you want in no time. It is possible to create a composition with bounden effects, animation background and different text attributes are given to clips (such as "name of the group", "author's name", "song's name").

Video capture from Desktop Windows is available. Image section can be overlayed on live video signal or above a clip or a digital data stream in the window with fuzzy frame, scaling and colour correction.TELE Info is a robust content playout and on-air text and graphics design server.

With vast possibilities for text and graphics design of played out video material and pass-through signal, much more extensive than those of TELE, TELE Info helps to organize a <

- Stream ALPHA Plus PCI-E Composite Board
- USB software protection dongle;
- CD-disk with software and demo;
- Software user manual in hard copy and on CD-disk in PDF-format.