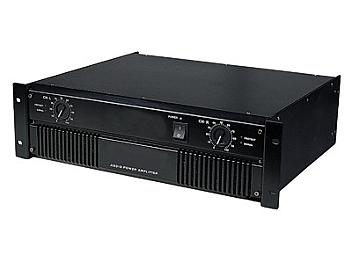 WARNING. Do not use this amplifier to power speakers with continuous power capacity under 575W@8Ohm, 878W@4Ohm. This model is designed for permanent indoor installations only.

By DJ Jiten from Auckland -South Island on 2011-01-01
Great Performance..Needs to Plug to 15amps Power Outlet to avoid Blackouts..Very Relible..All Stars..
Yeh impressive for the money

By Rick from Northland on 2010-06-23
I put the amp through a few rugged tests with a 4ohm dummy load at just below clipping with signal generator and a scope hooked up ,the sign wave was clean and semetrical ,the amp projuced 900 watts per side both sides driven at 4 ohms .,not bad at all,I have also used the amps on a few gigs with my PA rig I was not disapointed , So I will buy more.
Wicked

By Peter from Auckland on 2009-05-15
Powerful amp. Runs well. Only has banana plugs for speaker outputs, which
is very inconvenient
Globalmediapro AA1200 Audio Amplifier

By adam from Rapahoe on 2009-05-04
Awesome amp for the price. It powers my two big behringer subs quite
nicely.
Globalmediapro AA1200 Audio Amplifier

By partya from Wellington on 2008-12-10
Very grunty, clear sounding amp. The only bad thing is that is does not
have speakon outputs but this doesn't really matter. A literal bargain.
AA1200 Audio Amplifier