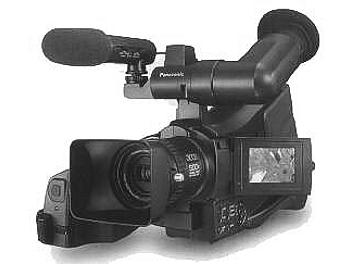 The Panasonic NV-MD10000 is a 3 CCD camcorder. It offers shoulder-mount stability and connects to a PC for computerized editing and webcasting.

By Roop from India on 2010-07-31
I bought this from other source about 8months ago. It works really good for social ceremonial videos but for professional works it has some problems such as you cant adjust audio level during recording or if u recording in tripod for a long time in a fixed frame and then suddenly if any charecter moves from in front of camera
then automatically camera jerks and I have not solve the problem yet.
Great Product

By Fangs from Bridgetown W.A. on 2010-06-05
I am very pleased with my purchase from global media.
The product is excellent

By Vit from Italy on 2010-01-29
Thank you for your efficency and cortesy.
panasonyc

By Schubert from Czech Republic on 2009-09-14
After some weeks of using the camera almost every day, I must say that it
is a good 3 CCD camera also for professional applications and with plenty
of useful manual functions like white balance, iris, manual focus, manual
recording audio level, external microphone input etc. I think for this
price, it has no concurrence. Even a good external telemicrophone is
included. I do also like the fact that it is also for bigger hands. Many
new cameras (and not only cameras!) are bad in handling especially for
older people because the buttons are too small. I am a musician and
studio producer of social- and musical films. Thanks to Panasonic and
Globelmediapro!
great value

By planet from noosa heads qld on 2009-04-14
this video cam is great value for money i have owned this cam now for 6
months and done a ton of work from live music concerts to stage plays and
surf videos, it has handled every situation with ease, top quality very
user friendly if you dont have a ton of cash to spend and want to look
like a pro, then go for this camera.
Delightful!

By jud from Australia on 2009-02-11
I purchased this model early last year (2008) (from another source) after
using a Sony Hi 8 for ten years. The results are outstanding. The
learning curve is high, with many extra controls (on-screen software) to
master. However, once understood, the pictures are crystal clear, the
sound from the add-on mic (supplied) is a delight also, very crisp.
Friends who have seen my videos have commented how close to normal TV
they are, and when they think they are watching TV, they don't know the
difference! It is light, easy to transport, and may be used low-down
thanks to the top-mount controls. Battery useage is good - although I
always carry spares (2). When used in the fully auto mode, it is hard to
fault, but still leaves the option of manual control.