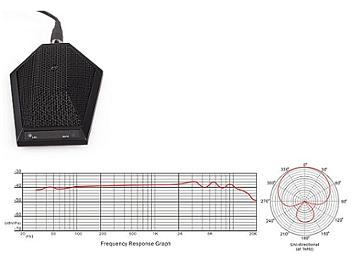 By James Verified Buyer from Christchurch on 2010-03-04
Good sound quality, quite weighty for its size, well built mic.
Don't forget to turn it on, there is a tiny switch on the front marked Mute, LED will glow when it's on.
Good bang for buck but needs a good eq

By Mykuhl from Auckland on 2010-02-25
When I first plugged in my MC19PA I was quite disappointed by the results initially. There was a lot of noise at about 2.5k, and it was quite muddy at the bottom end.

There is a switch on the bottom of the mic that there is no mention of what it does anywhere, so I decided to test it. The switch is a low cut, and is really quite effective at eliminating the muddiness at the bottom end. Unfortunately it cuts too much, and reduces the feeling of the microphone. I then played with an eq, and started to get some good sound from it.

By using a notch filter on the noisy band of frequency and using the lf roll-off switch and boosting the bass I found that I could get it sounding quite passable.

I tried it in a number of different situations, and tested out the polar response. I found that it actually gave a surprisingly good sound with wind instruments, sounding really nice in the alto range. It also gave a good sound with bongo's, particularly when I placed it on the floor under the drum, and used a small pencil condenser above it.

I also used it as a skype microphone, and the person that I was talking to was quite impressed.

The pickup response was not quite as uniform as indicated on the graphs, but was within the bounds of what you would expect. There was not quite as much elimination at 135 degrees, but it was enough to mean that the one time that I have used it live I didn't have any concerns about feedback.

With a good eq this is capable of being quite a good microphone, but beware using it without one. This is not as good a boundary microphone as the Shure or Crown models, but at the price you wouldn't expect it to be. It is cheap enough and good enough that it can make a good back up microphone.