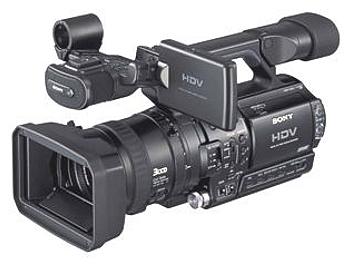 Image gallery (1)
3 CCD professional HDV camcorder.
1080 lines horizontal resolution.
The Sony HVR-Z1 records HDV and DVCAM images at 60i, 50i in SD or HD,
supports both PAL and NTSC.

By NOSREDNA from Central Coast Australia on 2009-12-06
Have used the ZP-1 for just over 2 years, both indoor and out and found the pictures excellent using the automatic setting. The low light performance was outstanding in every case. And the colours very true when used to copy 8mm and 16mm films projected on screen. The swing out monitor LCD is actually visible in all but very bright sunlight. In co production with another operator using much more expensive gear, it was not possible in the final edit to be sure which camera was used for shots.
Dark footage

By Kenneth from Kenya on 2009-08-31
The Z1 performance indoors is below my expectation of a HDV camera. Under
circumstances where my PD100 or PD150 could perform without an additional
light, the Z1 camera did not have enough gain to produce vivid pictures.
And even outdoors, some footage were unnecessarily dark. i tried to
improve gain even risked by reducing the shutter speed to no avail. Is
that Z1's weakness or there is a custom setup i can give it to improve on
the brightness?
gooD

By popper from Malta - EU on 2009-02-16
the camera is lovely to own and exellent to work with. the lcd screen is
extremely true, unlike in the case of other cameras, but sony lived out
their name on this one. only 3 slight problems - the automatic iris
control gives you too much light in your shot, sometimes verging on
burning the white. you cannot control the volume of the audio monitor
[which is good for some things, not so good for others] and everytime you
make a selection in the menu, the next step is that it closes so you have
to keep going into the menu and sub menu over again if you want to access
something else.