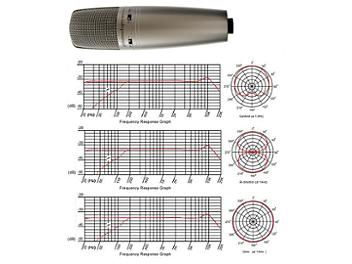 By mrfx from nz on 2012-03-16
This is a versatile, well-built, good all-round studio condenser for anyone on a budget.

I've used it in the studio on vocals and acoustic guitar where it sounds crisp and fairly detailed.

I've also used it on stage on accordion and clarinet where it performed extremely well - no feedback issues, very little handling noise, and a very true and natural representation of the instruments.

The switching features are impressive for a mic in this price range. As well as a 10db attenuation switch and a bass roll-off switch, it has 3 polar positions - Cardioid, omni, and figure 8. It seems to sound best in cardioid which has a slightly brighter and louder response than the other two settings.

Overall the construction is more solid than I was expecting. It doesn't look or feel cheap at all.

I did notice a slight click when switching between polar patterns, but you should be turning your volumes down when you adjust a powered mic anyway.

I'll say it's the best value large diaphragm condenser that I've used. As another reviewer above said, it seems like a $300 or $400 mic. You won't mistake it for a Neumann, but you could probably buy a box full of these for the price of a U87 and it'll do exactly what you need it to do and more.

Looking forward to trying it out on lots of other instruments to see how it goes.
Great for Hammond & Leslie

By Brendoon from Christchurch, New Zealand on 2012-02-07
This is the second of these I've bought, completing a matched pair for leslie recording.
Normally a leslie requires three dynamic mics to close mic the horns in stereo and the bass rotor in mono.

Placing these a couple of feet back from the amp perfectly captures both upper and lower rotors, no need for close mic'ing.

The mic also performed VERY well for a narration vocal. The best mic I've had in fact, and at a cheaper price than run of the mill dynamic mics like the shure SM57, giving a much truer representation of tone too.

I wish GlobalMedia had a suitable shock mount in the same price range though!
MCS-1VAI Studio Condenser Microphone

By Richard G from Christchurch on 2011-07-04
This is a high quality microphone and for the price I would say you would not get anything as good as this even on the second hand market. It has a crisp and detailed sound. I found it great on vocals, acoustic guitar and as a room mike on drum overheads. There really isn’t anything to complain about the sound or construction of this mike. The build is solid and the mike is neatly put together. The detail around the grill is of a higher quality than to be expected from a cheap Chinese condenser. Many cheaper mikes fall short in this area as it can be expensive to manufacture these more detailed parts. This would indicate to me that the stock is of a mid price range rather than bottom end. One thing worth noting is that the mounting clip is not provided and so you will need to find a way to attach it to your stand. The mounting clip screws in from the bottom, and although this design is standard, I could not find any available to purchase over the internet. It will fit into a typical (cradle type)shock mount but these are usually about the same price as the microphone itself. The mike also appears to be back to front. The polar pattern sign is at the rear of the mike rather than at the front. So if you sing facing the polar pattern sign and it sounds bad then you need to turn the mike around. This one caught me out and initially I thought I had bought a dud! These issues a side, for the money you can’t go wrong. I would say it is comparable to mike worth between $300-$600. The main issue will be whether it suits your voice or not but this is the same with any mike no matter what price you pay.

My impression is that this is a good quality all rounder and will be adequate for most applications. The microphones may be seconds (because they appear to be back to front) but this in no way affects the sound. There is also the issue of no mounting clip but this can be worked around. Overall the best buy I have made yet on a multi patterned condenser.
a microphone for alls

By cagnetta_cano from ITALY on 2010-05-28
i have two MCS-1VAI condenser mic and i verified many audio tecknics and many sound sources .
Panoramic AB, XY ,Ortf ,MS Blumline , two 8 and others .
The microphones work fine .
Is many important a good ambient .
The voice is excellent in cardioid mode -super.
The two microphones work good with natural sound , acustic instrument , guitar , piano, strings , brass .
Is possible make a excellent sound recoding of Classic music , quartet , strings ensemble and orchestra , pop brass band and many other.
The noise il very low .
good work !