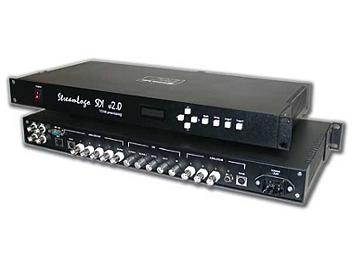 Image gallery (1)
Stream Logo SDI v2.0 is designed for operation using 8 and 10 bit serial component input SDI signal and 10 bit output signal in full compliance with CCIR656 and SMPTE259m. In the course of signal passing through the card all support information is intact, sound packs may be either left intact or changed, depending on conditions required. The input signal is error-checked with checksum calculation by the EDH method. For the output EDH packages are only formed anew in compliance with recommendations SMPTE165.

- internal GPS module enables setting system exact time as received from satellites. This option is necessary if clock display is required. It is also possible to receive exact location coordinates from the satellite through GPS receiver, which may be practical for this device application in mobile television stations.
- temperature, pressure and humidity sensors (in any combination) for connection to Stream Logo SDI v2.0 and broadcasting their readings.