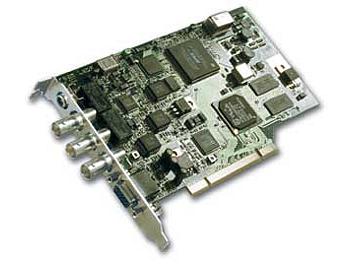 New Stream Alpha SDI has become a multifunction video card, which can replace several studio devices. Apart from main function of superimposing graphics over the passing digital SDI signal or its playback for an external mixer, this video card can be used as transcoder between analog and digital SDI video signal formats and single frame or clip grabber.

Stream Alpha SDI video card is working with 8 and 10 bit serial component SDI input signal and 10 bit output signal, in full compliance with CCIR656 and SMPTE259m recommendations. In the course of signal passing through the card all control information is intact, sound packs may be either left intact or changed, depending on conditions required. The input signal is checked for errors with checksum calculation by the EDH method. For the output EDH packages are formed anew according to SMPTE165 recommendation.

For using the described devices with an external mixer with DSK (Down Stream Key), the output of the key signal (alpha channel) in analog and digital formats is provided. The card setup utility enables setting both positive and negative key signal delay with respect to graphics playback over a wide range.

On computer switch off or if BYPASS mode is on for all devices, input and output are interconnected through the relay, the 75 Om load being switched off. When computer power is switched on and in the course of initialization the passing signal is in no way distorted at the output.

The new model enables displaying the input video signal and the result of its mixing with computer graphics on the computer monitor in real time.

Video card memory buffer for computer graphics output is 720 x 576 points for 50 Hz video systems and 720 x 240 for 60 Hz video systems. Each point possesses a 32-bit representation, of which 24 bits represent its color (16 million hues), the remaining 8 bits being employed for representation of one of 256 grades of transparency (alpha channel). Though a computer graphics point color component is represented by 24 bits (8 x 8 x 8), in mixing the 30 bit representation is used (10 x 10 x 10), i.e. if the input signal has 10 bits, it will remain the same at the output.

Memory used for graphics buffer and PCI bus bandwidth of the modern computers makes it possible to update its contents in real time, without frame dropping, while transmitting uncompressed video (32 bit/pixel) together with the sound. Sound can be included in output signal in SDI format and be played through computer sound card simultaneously. All this makes it possible to use video card for broadcasting not only soundless titles and logos, but also full-screen slips with sound. This does not require using a have separate video station with offline editing card for that, all output is performed through a single card from a single computer. It simplifies overall switchboarding and ensures simple and reliable broadcasting automation.

Chroma key is another way of defining mixing proportions, when individual mixing proportion with computer graphics is set up for individual color groups of a video signal. Moreover, if only 12 bit (4 x 4 x 4) color space was considered before, which only allowed rough determining "cut-out" areas, at present its dimensionality is 24 bit (8 x 8 x 8), which, together with semi-transparent mixing, ensures very high precision at video signal and computer graphics borders that have now stopped "boiling". If the passing signal has high noise level, a mask on the lower bits in its digital representation can be used.

Stream Alpha SDI video card apart from the serial digital input has analog YUV/RGB, S-Video, Composite inputs. It can form analog YUV/RGB, S-Video or Composite output signals simultaneously with SDI signal regardless of the input used (only one optional composite output was available before). Input signals may be in PAL, SECAM or NTSC, output ones in PAL or NTSC only. Frame rate does not change, i.e. NTSC can be obtained and converted from NTSC only.