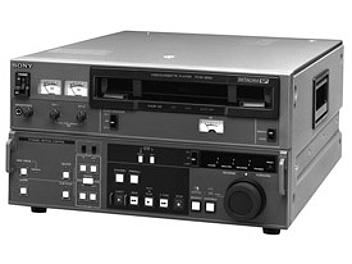 Superior Picture Quality
The PVW-2650P has superb playback picture quality, a result of its use of the world standard Betacam SP recording format. Betacam SP is a component recording format, in which the chrominance signals (R-Y, B-Y) are time compressed and recorded on one track by using CTDM (Compressed Time Division Multiplex) a technology originally developed by SONY. The luminance (Y) signal is recorded on a separate track so that cross colour and cross luminance effects do not exist in this system.
The performance advantages of Betacam SP can also be attributed to the use of the metal particle tape.
The PVW-2650P can playback both metal particle tapes and oxide tape. Any metal tape recorded by the PVW-2800P, PVV- P and BVW series Betacam SP VTRs, or oxide tape recorded by the BVW series VTRs, can be played back by the PVW-2650P.

Excellent Noiseless Playback Dynamic Tracking
The PVW-2650P provides broadcast quality noiseless playback pictures within the range of -1 to +3 times normal tape speed due to the Dynamic Tracking technology originated by Sony. The highly advanced DT system has new head dither circuitry and computerised control to ensure accurate head tracking. The DT heads are mounted on a ceramic bimorph, with positional information derived from strain gauges and fed back to the control system. In the VARIABLE mode, continuous noiseless pictures are reproduced over the range of -1 to +3 times nromal playback speed in 54 steps.
The PVW-2650P also features a JOG mode in which the tape is moved frame by frame in either direction in step with the rotation of the search dial. This mode also privdes clear, still pictures.

Variable Speed Playback Memory
The PVW-2650P provides Dynamic Motion Control (DMC) playback. This function memorises the desired tape speed within the DT range of -1 to +3 times normal speed and plays back noiseless pictures at that speed. The PVW-2650P, equipped with the built-in DMC facility, can perform DMC editing when used as a feeder with the PVW-2800P

Long Playback Time
The PVW-2650P accepts both L-size and S-size cassettes, giving playback times of over 90 minutes and 30 minutes respectively. Both grades of Sony Betacam SP videocassettes, the BCT series and the SBT series, can be used in the PVW-2650P. For the highest possible performance, the BCT series is recommended.

Compact and Lightweight
Compactness and lightweight are key factors designed into the PVW-2650P, which weighs approximately 25kg (55lb 2oz), and is 5 units high (19-inch rack mountable). The power consumption is 130W.

High Speed Picture Search
The PVW-2650P has a high speed picture search facility which provides recognisable monochrome pictures at up to 24 times normal speed in forward and reverse. At speeds up to ten times normal these pictures are reproduced in colour. In the jog mode, tape movement accurately follows the rotation of the search dial in both directions.

TBC Remote Control
In addition to the TBC controls built into the PVW-2650P, remote adjustments can be made with an optional BVR-50 connected via a D-sub 15-pin cable to the rear panel connector (TBC REMOTE).

Built-in Time Code Reader
Reading of both VITC (Vertical Interval Time Code) and LTC (Longitudinal Time Code) to the SMPTE format, together with user bits, is a standard feature of the PVW-2650P.

Colour Framing
PVW-2650P is free from colour framing as long as signals are fed directly from the component signal source. However, when playing back the tape-recorded from the composite source, the colour framing function is needed for keeping the video signal impairment to the minimum. The Colour Framing System of the PVW-2650P is the combination of the 4-field capstan servo function using the off-tape CF (Colour Framing) ID pulse and the off-tape VISC (Vertical Interval Subcarrier) function which matches the decoding axis to the encoding axis. As a result,superior composite output is achieved.

Character Display
The PVW-2650P is provided with a built-in character generator and its output can be superimposed on the signal from Video Output 3 or Monitor Output. It displays either time code (VITC/LTC/U-BIT) or CTL timer data read from tape. VTR function status, including shuttle tape speed, can also be displayed by accessing the setup menu. Furthermore, error number and status can be automatically displayed when an error is detected. Character display is On/Off switchable from the subcontrol panel. When the PVW-2650P

Versatile System Interface
RS-422A Serial Interface (9-pin)
An RS-422A serial interface is provided for versatile editing system expansion and flexible system control. The PVW-2650P will interface with other RS-422A equipped Sony machines.
YIR-Y/B-Y Component Video Signal Output
The PVW-2650P provides two types of connectors for Y/R-Y/B-Y component signal output, three BNC connectors or a Betacam 12-pin DUB connector. This component signal interface allows full advantage to be taken of the superb performance of the Betacam SP format.
Composite Video Signal Output
In addition to the component connectors, the PVW-2650P is equipped with composite video signal output connectors.
U-matic DUB Signal Output
With the optional BKW-2030 U-matic DUB Out Kit installed, the PVW-2650P can transfer Betacam SP material to a U-matic VTR through its 7-pin U-matic DUB output connector with minimum picture degradation. This transfer is made without the signal being affected by the performance of the Y/C separator in the U-matic VTR.
S-video Signal Output
An S-video signal output connector is also provided so that other equipment with S-video connectors can easily be interfaced to the PVW-2650P.

User Friendly Dial Menu Operation
To meet the requirement for customised operations, the PVW-2650P is provided with an initial setup menu which has easy accessibility, simple operation and allows many functional parameters to be preset to help the operator. This initial setup menu is scrolled and modified by the search dial while being monitored via Video Output 3, Monitor Out, or on the LED Timer display. The modified menu is memorised in a non-volatile memory.

Improved Serviceability
For easy maintenance and servicing, the PVW-2650P is provided with comprehensive self-diagnostics. A digital hour metre is also fitted to indicate the accumulated time of power on, drum rotation and tape running. It can also display the number of threading / unthreading operations.

19-inch EIA Standard Rack Mountable
With the optional RMM-110 Rack Mount Kit, the PVW-2650P can be mounted into a 19-inch EIA standard rack without taking off the side panels.