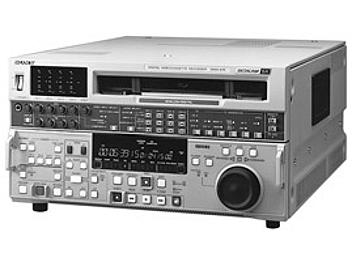 The DNW-A75 is a Beta SX format studio edit deck that will playback the analog 1/2 inch formats Beta SP and Betacam (oxide). Beta SX is a digital format developed primarily for the news-gathering professional. Because the format is based upon the MPEG2 standard, it is easily integrated to nonlinear edit environments. And because Beta SX is digitally sampled 4:2:2, quality remains intact generation after generation. Additionally, the deck operates in both NTSC and PAL environments.
Old School Betacam Playback
As with many Beta SX products, the DNW-A75 will play back analog Betacam and Beta SP recorded tapes. This enables existing Beta SP camcorders to be used for news acquisition and easy integration of the analog Betacam and SP tapes that many broadcasting stations already own. Additionally, the deck is capable of analog Dynamic Tracking playback.
NTSC and PAL Operation
The DNW-A75 can easily be switched from NTSC (525/60) to PAL standard (625/50) modes. In addition, Analog Betacam and SP playback is possible in both standards too.
Frame Accurate Linear Editing
The DNW-A75 has insert and assemble editing capabilities. This allows machine to machine or even A-B roll edits with precision.
Pre-Read Editing for Clean, Complex Layering
These capabilities are ideal for titling, color correction, and layering video. It is also useful in sound sweetening suites as well.
Dynamic Motion Control Feature
The DNW-A75 provides slow motion playback from the control panel or from external controllers. These scenes can be edited to normal speed video for simple but effective special effects.